Our wearable seizure diary‘s campaign slogan is “Big Data Beat Epilepsy.” But what does a wearable have to do with big data?

Let’s start with the power of big data.

The curation of large datasets of diverse but well-labeled data was the foundation of the recent boom in machine learning. Dr. Fei-Fei Li’s ImageNet at Stanford University, for example, was tantamount in revamping deep learning algorithms for image recognition to improve accuracy and efficiency.

For the past decade, neuroscientists have also increasingly supported the idea that big data is a critical part for understanding the brain.

Rather than probing a few neurons, a handful of neural circuits, or a single brain region, big data allows neuroscientists to gather deeper insights into the intricate workings of the brain. The human brain is perhaps the most complicated computer of our time. To decode it takes vast amounts of curated data, organized in easily sharable structures. A neuro-data infrastructure, in turn, promotes collaboration and the gathering and sharing of even more data–a virtuous cycle that exponentially accelerates our progress to decode the brain’s mysteries.

Large scale neuroscience collaborations such as the BRAIN Initiative (BRAINI), the EU’s Human Brain Project, and International Brain Initiative have already demonstrated the power of “big neuroscience” for accelerating basic brain research. (Novela is proud to be a corporate partner of INCF, a global standards organization that helps bring large-scale neuroscience projects like BRAINI to life.) So far, these regional and global collaborations have produced new tools to study the brain, and generated brain atlases at previously inconceivable detail. These tools and maps, in turn, spur a new generation of neuroscientists to ask the hard questions about our brain: why is it so efficient? How can we emulate it? And when and why does it go awry?

So far, the power of big data in neuroscience has mostly been limited to basic research. But why not also bring its power to clinicians and their patients?

Epilepsy is an enormously heterogeneous condition with over 40 different types.  Seizures often arise from diverse neurobiological origins in the brain. Diagnosing, monitoring and treating epilepsy isn’t one mystery; it’s a family of mysteries wrapped under a single umbrella.

This is problematic when it comes to treatment. For example, a drug that works to control seizure for one type of epilepsy may not work equally for another type. Oftentimes it takes trial-and-error to figure out which medication (or medications) helps; other times, existing medication may only have limited effect.

Bottom line: epilepsy is variable, complex, and no one has the exact same experience. That’s where big data can help. Similar to brain maps, big data allows mapping real-world evidence (RWE) about seizures and their medication into a powerful resource–one that scientists can mine to better understand the many faces of epilepsy and its associated comorbidities. In turn, these insights could lead to more personalized treatments and more accurate seizure monitoring solutions.

We previously tested the idea of #BigDataBeatEpilepsy with a global challenge to neuroscientists and AI experts. The goal was to analyze a large EEG database to predict seizures up to minutes before they occur. In less than two months, we gained powerful algorithms that outperformed some state-of-the-art seizure detection methods. 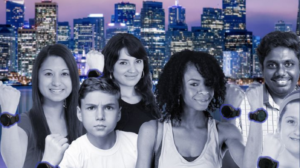 The key to this type of knowledge acceleration is getting reliable data.

As the adage goes, when it comes to analyzing big datasets “garbage in, garbage out,” meaning that unreliable seizure reports can actually confound treatment and the search for new medical solutions . Currently, it’s not straightforward for people with epilepsy to record their seizures or track their medication at home. That’s why we developed our smartwatch seizure diary with simple one-button seizure logging, mood check-ins, heart rate, movement and medication tracking features.

We’re confident that the watch can help individual people living with epilepsy and their loved ones better track seizures. But with consent, anonymized biomarker data will also contribute to a powerful research resource for scientists to further develop better treatments. For example, by looking at biomarker changes during thousands of seizure episodes of varying types (or even hundreds of thousand), scientists may one day be able to accurately detect or even predict multiple types of seizures based on biomarkers alone. They may also identify more personalized factors that predict when one type of medication might work–and when they don’t. These are precious insights hard to gain from the lab data alone.

These aggregated data from the real world is one way to tame the complexity beast that is epilepsy. That’s why #BigDataBeatEpilepsy is our campaign’s slogan–because it paves the path to bettering the lives of over 65 million people in the world with epilepsy.